What a night!!!!!  The Teacher Feature Night put on by Mahin was so much fun!  It was so nice seeing so many people I haven't seen in so long.

My students and I were in the second half of the show so we got to watch the first half.  The evening started off with the Dojo Girls performing their comedy sword routine.  They performed this dance at belly laugh and it was great to see it live!

Stephanie was next doing her very first solo; fantastic job!!!!  Mia Donna and her students were next and what a pleasure to watch; awesome job ladies.  Mahin's student bouquet was next performing classical Egyptian style dances.  Ending the first half were solos by Carmen doing a drum solo, Fayza performing a Beladi and Mahin performing an Oriental style dance with a drum solo.  What a great mixture of styles from comedy, fusion to classic Egyptian.

I missed most of the second half since my students and I were performing in this part.  Mahin and Baraem Jamila started the show off with a Turkish Rom dance and Sonoran Rose, my students and I started with a candle dance and ended with a peppy skirt dance.  My students were awesome!!!!!  I watched the video and they were right on!  We were followed by the Dojo Girls with guest Carmen doing Bhangra than followed by Mahin and Baraem Jamila with an Oriental dance and drum solo.  I followed with a veil dance to "Nothing Else Matters" by Apocalyptica and Shannon and her students ended the evening with a skirt dance to live music.  I was able to catch the last part of their performance and that is all I saw of the second half :-(

Mahin great job putting this event together we had a blast.  Below are a few photos from the evening.  I took more photos but was in the back row and they didn't turn out. 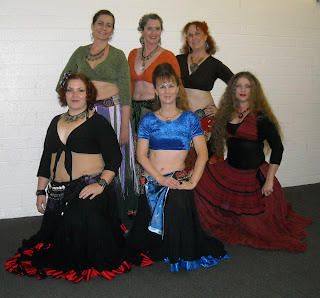 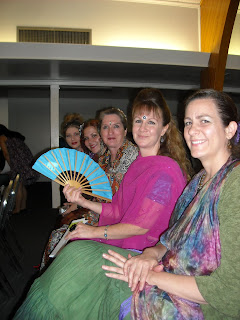 Back row in the audience 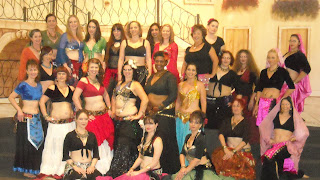 Group shot of all the dancers from the evening
Here's a mini movie of our performance.

I'm a full time belly dance instructor, performer, webmaster of Joyofbellydancing.com. My websites are listed in my favorite links section, Joy of Belly Dancing along with my photography website and my belly dance and photography blogs. Please check them out when you have time.